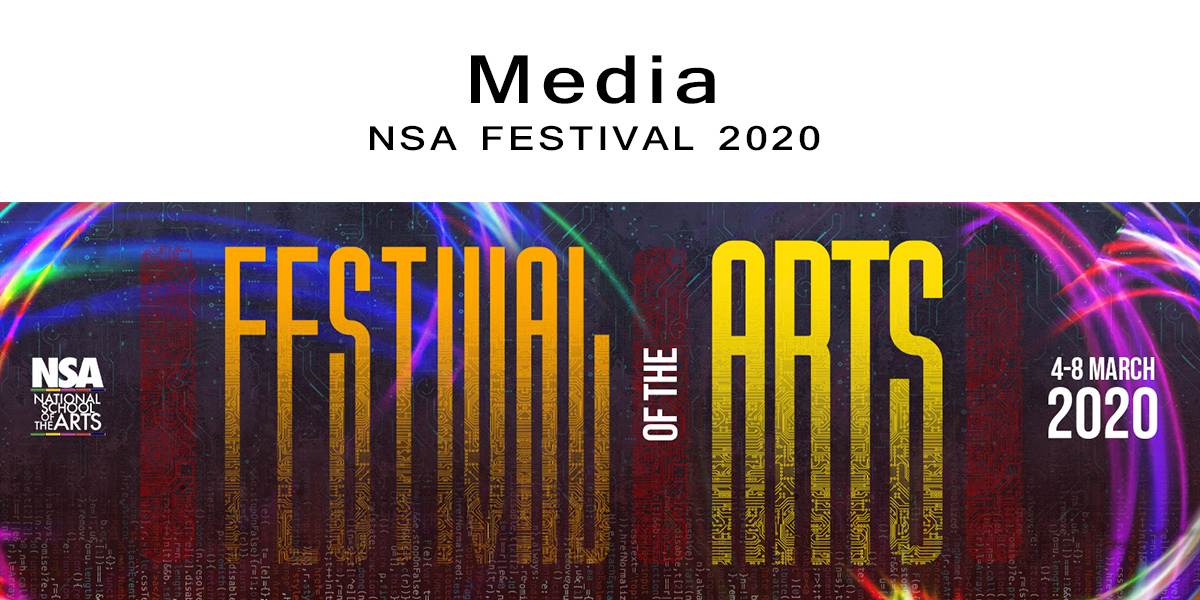 From the 4th – 8th March, youth arts willbe in the spotlight when the

“Pushing the boundaries of youth creativity, the 19th Annual NSA Festival offers an exciting and diverse line-up of performances, exhibitions, guest productions, workshops, and installations,” said Mr Natali Principal of the NSA, “we curate the Festival with high school learners in mind, and are exceptionally proud of what will be presented when the curtain rises on the 2020 Festival of the Arts. It is the major showcase event for the school and our learners always rise to the occasion in an awe-inspiring way,” continued Natali.

Flagship productions of the 2020 Festival include Hip Hop Hamlet. Set in the bank of Elsinore where “something is (very) rotten” Hip Hop Hamlet holds a stark “mirror up to nature” as it reflects corporate and political corruption, greed, and political manoeuvring. Hip Hop Hamlet comes from the same NSA Directorial team of Laine Butler and Johan Anker, who reimagined A Midsummer Night’s Dream (2019) and Macbeth (2018). Joining the creative team as choreographer is NSA alumni Cinda Eatock, who brings a wealth of theatre experience to this bold contemporary production. Set and lighting are by veteran designer Stan Knight.

A guest production on the Festival programme is ECLIPSED Phifalo Ya Ngwedi from the Market Lab. The production was workshopped with Market Theatre Laboratory first-year students. The creative team includes director Sylvaine Strike, voice and text specialist Gina Shmukler, and choreographer Phumlani Mndebele. Hailed as the new wave of protest theatre from a post-democratic South Africa, this research-based production exposes the horrific mental health care “genocide” that became known as the Life Esidimeni Tragedy. Eclipsed is a necessary conversation about the unspeakable. This startling production will play in the Lesedi Theatre at Joburg Theatre and will doubtless stir hearts and minds into consciousness. ECLIPSED is powerful theatre-making from one of the country’s top training institutions.

Also playing in the Lesedi at Joburg Theatre is The Music Makers from the music department. This performance soirée showcases some of the schools leading vocalists and instrumentalists.

The Space.com at the Joburg Theatre features a showcase of work from the emerging playwrights and theatre-makers of the NSA Drama Department. First up is SCOUT – Directed by Mike da Silva, with a script developed by the cast. SCOUT is a timeless tale of the friendship between a man and a dog. Conceptualized in collaboration with the Society for Animals in Distress (SAID) and the NSA drama department, ‘Scout’ is the saga of a wily street dog who learns through the kind treatment that he receives from uGogo, that humans are not all that bad. This ‘visual theatre’ play makes use of mask work and puppetry to give a voice to man’s best friend. There are no words, but audiences can expect a bark or two! Scout, the puppet was crafted into life by Christelle van Graan while sets and masks are the work of Philile Sishuba.

The acclaimed play EVIL featuring Jaques de Silva as Erik Ponti returns to the Festival due to public demand. It premiered during the 2019 Festival of the Arts and has since enjoyed national exposure. It is a brutal account of boarding school abuse and bullying and is a catalyst for conversations around this heartbreakingly prevalent scourge.

Exhibitions and installations are core to the Festival of the Arts. The school will transform into gallery spaces for the EXPRESSIONS exhibition showcasing top work from across the grades with particular emphasis on the matric class of 2019. In the main foyer of the school, a large installation titled “LIFELINES” will have pride of place. Sponsored by Adcock Ingram Critical Care, the work is made from IV tubes and drip bags and speaks of connections and light. Also in the Main School is the highly anticipated exhibition of cartoons by transgender activist Sophie Labelle. She has curated a selection from her successful webcomic, Assigned Male.

Sophie will also be in conversation on Friday 6th March from 11:30 in the NSA Main Hall. Her exhibition and presentation is supported by the Canadian High Commissioner in South Africa and the NSA is proud to be a destination on her Serious Trans Vibes Tour.

The Art Gallery, housed in the Gerald Moerdijk heritage building, will be home to two exciting exhibitions; ELEMENTS 4IR and a unique CERAMICS exhibition. Co-curated by the Matthew Goniwe School of Leadership and Governance, ELEMENTS 4IR looks at cyberspace, coding, robotics, and other aspects of the digital frontier, including displays of Virtual and Augmented Reality. The motivation is to show where the 4th Industrial Revolution is headed and how creativity is the driver.

The Ceramics Exhibition features the work of Mexican ceramicist Paloma Torres and shows the NSA’s contribution to her installation in the Nirox Sculpture Park.

The Dung Beetle Project is a moving, educational sculpture that turns single-use plastic items into usable fuel. This extraordinary creature will be at the Festival powering a sound system and a stage and educating the learners about how communities can create gasification units. The Dung Beetle is technology dressed up as a sculpture that is fast becoming a symbol of change and hope.

The Dung Beetle will show its power from Wednesday through to the Saturday of the Festival on the NSA field.

“We find every opportunity to put the “A” for art into “STEM” education, and I believe that our 2020 Festival sees technology and art finding their nexus. Full steam ahead! ” concluded Natali.

There is also a fringe of student-generated productions that find their home in the NSA Hall.

The Festival allows for an immersive art experience. At R200 for a day pass giving access to as many productions as possible or for an affordable R100 for an evening show – the Festival of Arts is an affordable offering to the arts-loving community.

The National School of the Arts is South Africa’s Leading School of Specialisation in Performing and Creative Arts.

The 2020 Festival of the Arts is made possible through a social investment made by the First Rand Foundation through the RMB Fund for Education for a Creative Economy, a supporting grant from Business and Arts South Africa, Adcock Ingram Critical Care, the Canadian High Commission and The Matthew Goniwe School of Leadership and Governance. The NSA acknowledges the Mexican Embassy in South Africa and Benji Liebmann from Nirox for extending a collaborative hand to the National School of the Arts for the ceramics project. The Festival is indebted to Assitej SA for their tireless support and guidance during the curatorial process and on-going collaboration.

NSA Festival of the Arts

National School of the Arts

For the full programme please visit